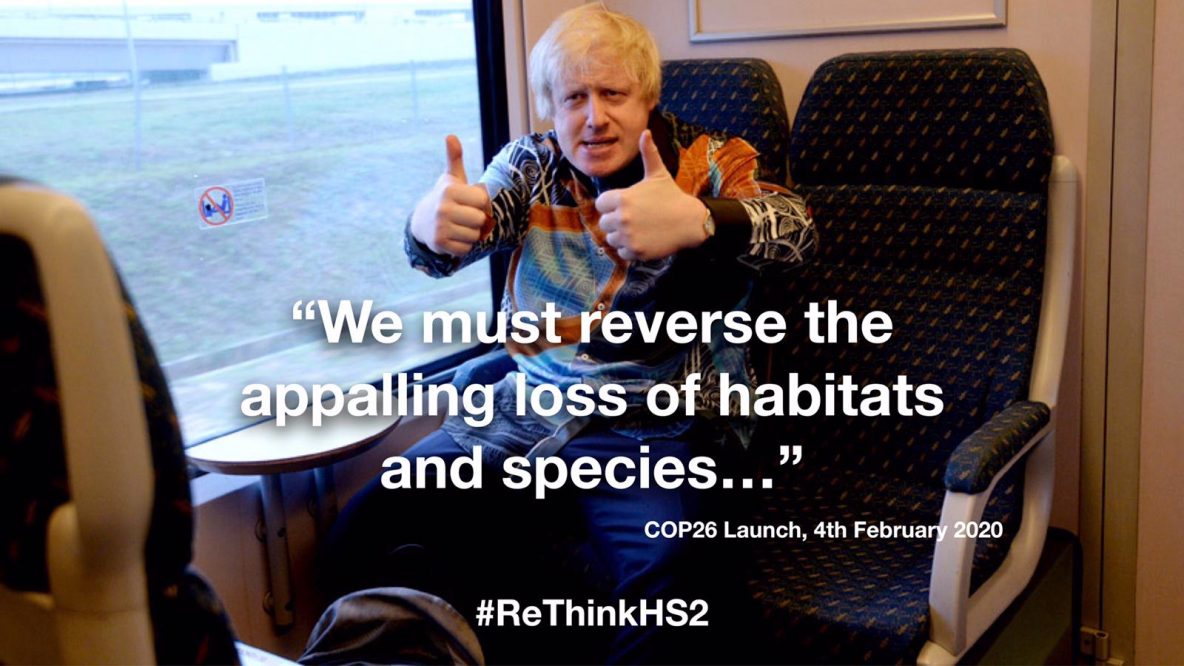 Choices. It all comes down to choices.

The government has choices to make about the ever present Climate and Ecological Emergency over ‘Business as Usual.’

In giving the go-ahead for this vanity project that is so over-budget and environmentally destructive, the Government has not listened to the people. The public are crying out for better local transport. In making this spending choice, the Prime Minister has approved a bottomless financial sinkhole that will destroy much of what little remains of Britain’s precious woodland, wipe out countless endangered and protected species, be a vast new source of carbon emissions, and poison a quarter of London’s water-supply. All at great cost to taxpayers.

Last week, in the run up to the UK hosting COP26 later this year, Boris Johnson said: “We must reverse the appalling loss of habitats and species”. By approving HS2, the Government has shown its card in the year when the world’s eyes are on the UK to demonstrate leadership. He made no mention of the Emergency in today’s announcement.

The government tout it as an alternative to driving or flying but their own projections for modal shift from either are a just a meagre 4% from roads and 1% from aviation. Most passengers would be from the conventional rail lines, which is lower carbon, so switching to HS2 means a more carbon intensive mode of transport. Their own figures for operation (not including construction) show net increase in emissions for some 60 years from launch date.

“This decision is a cop out by Boris and the government in dealing with our Climate and Ecological Emergency in the face of the UK hosting COP26 later this year – what signal does this give to other countries? It is so completely incompatible with the Net Zero emissions target as it will not be carbon neutral for 120 years.

“We support massive infrastructure investment but this is not green, it is not smart. With a budget that could reach £150billion on completion, it’s an aviation shuttle service, already enabling massive amounts of aviation expansion, it’s going to destroy or damage almost 700 wildlife sites including over 100 ancient woodlands. Public transport needs to be improved where it makes sense, in particular, the North of England needs help with its transport infrastructure, and this has to be done in a way that is sustainable and supports our move to a biodiverse and carbon neutral future.”

Time has almost entirely run out to address the ecological crisis which is upon us, including the 6th mass species extinction, global pollution, and abrupt, runaway climate change. Societal collapse and mass death are seen as inevitable by scientists and other credible voices, with human extinction also a possibility, if rapid action is not taken.

Extinction Rebellion believes it is a citizen’s duty to rebel, using peaceful civil disobedience, when faced with criminal inactivity by their Government.

Extinction Rebellion emerged from the Rising Up! network, which promotes a fundamental change of our political and economic system to one which maximises well-being and minimises harm. Change needs to be nurtured in a culture of reverence, gratitude and inclusion while the tools of civil disobedience and direct action are used to express our collective power.